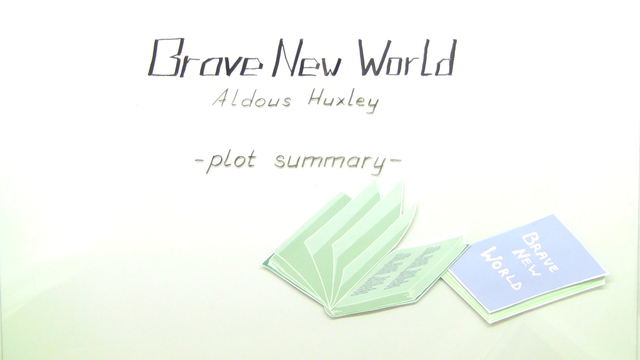 In 1932 the British author Aldous Huxley published his most famous novel, ‘Brave New World’. ‘Brave New World’ is both a utopian and dystopian novel. A utopia is a world with ideal conditions for humans. All the negative things, like hate and greed, do not exist in a utopian world. Dystopia means anti-utopia. It is a utopian world gone wrong. This video will present the plot summary for Brave New World. It’s a complex story and you might want to have your dictionary ready!

The story begins with the director of the fertilisation centre taking a group of students on a tour around the building. The building is in London, England. The setting is the future, in the year 2540 to be exact. In this far future humans are no longer individuals.

The director explains how children are born. They are created in test tubes and are then sorted into one of five classes. The classes are Alpha, Beta, Gamma, Delta and Epsilon. Alpha is the highest class and Epsilon is the lowest class. The director shows the students how the children in the new world are conditioned. The conditioning makes the children look and behave correctly for their class.

Mustapha Mond is an alpha. He is one of the ten world controllers and he is an important character in the novel. Mustapha Mond meets the students and explains how children are conditioned to have no strong emotions. This is the end of the beginning section of the novel.

This is Bernard. He is an alpha but feels like an outsider and the other people think he is strange. He is one of the main characters. Bernhard invites a woman he likes, Lenina, on holiday to the savage reservation in New Mexico. He applies for a permit from the director. The director tells him that he once went to the same reservation with a girl called Linda. She got lost and he never saw her again. Lenina and Bernard go to the reservation. The savages are Indians who still have their own babies. Lenina and everyone in the new world think this is disgusting and embarrassing. While Bernard is in the reservation he phones his friend, Helmholtz. Helmholtz tells him that the director is planning to send Bernard to Iceland because his work is not good enough. Lenina and Bernard have a tour around the savage reservation. They meet a young man called John. John is the son of a woman called Linda. Bernard realises that Linda is the woman in the director’s story. He also realises that John must be the director’s son. Bernhard asks John and Linda to come back to the new world with him. John falls in love with Lenina. Lenina does not understand what love is, because of her conditioning. John, Linda, Bernard and Lenina arrive back in the new world. The director tries to send Bernard to Iceland but Bernard publicly announces that the director is John’s father. Everyone is shocked and the director is disgraced. Bernard is therefore allowed to remain in London. John and Bernard become very popular with London society. John receives a phone call and finds out that his mother, Linda, is dying. He visits her in hospital and she dies while he is there. John is devastated and attempts to explain the dystopian world to the hospital staff. He causes a riot. This scene is the climax of the novel. You will notice that John quotes from Shakespeare, with the lines that give Huxley’s book its name. The quote is: "O wonder! How many goodly creatures are there here! How beauteous mankind is! O brave new world That has such people in't!" - William Shakespeare, The Tempest, 5.1 Bernard and Helmholtz soon rush to the hospital to help John. John, Bernard and Helmholtz are arrested by the police and are brought to Mustapha Mond’s office. This is the end of the middle section of the novel. Mustapha Mond and John discuss the advantages and disadvantages of the new world. Bernard and Helmholtz are exiled to an island and John moves to a lighthouse and lives alone. John self-flagellates and people come from all over the country to watch him. John sees Lenina in the crowd. The intense atmosphere results in a mass orgy. The orgy signifies the anticlimax of the book. Afterwards John feels very angry that he has submitted to the new world. He hangs himself. Brave New World is a novel with 18 chapters. It presents many philosophical and complex ideas about happiness, truth, society and technological development. What about you? Would you like to live in a Brave New World like this? You might find the decision harder than you first think!

"Of Mice and Men" – Interpretation and Public Perception (Steinbeck)