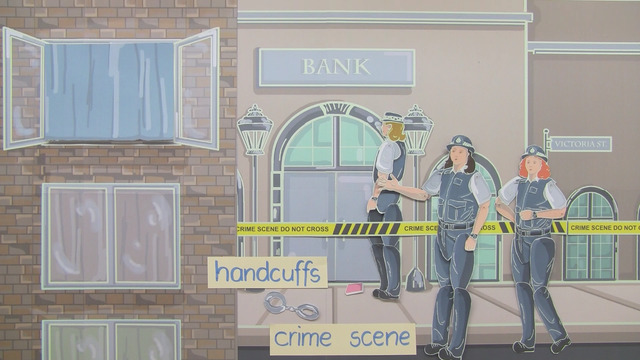 Hello! I’m De-tec-tive Susie Quinn and I work for Scotland Yard. I can help you learn important words about crime. A crime is something illegal. And YOU can help me to catch a criminal, the person who committed the crime.

Yesterday evening there was a bank robbery in Victoria Street. The bank robber took 1 million pounds. Are you ready to help me? Ok, let´s go! The police suspect a teenager, Rob Smith. That means they think Rob is the bank robber. But I don’t suspect Rob; I don’t think he is a criminal.

Let me tell you what happened earlier this day. This morning Lucy went to work and found the bank manager. His hands were tied together with handcuffs. He is the only person who is affected by the robbery, he is the only victim. The police and the detective (me!) just arrived at the crime scene. This is the place where the criminal committed the crime. Look! There are the handcuffs… But there are no broken windows or doors. How did the bank robber get into the bank? Now it’s time to speak to the witnesses. Wait … What is a witness exactly? A witness is a person who is there when a crime happens. A witness may see something important that helps the police to catch the criminal. In this crime, there are three witnesses… Witness 1 is an old lady who lives opposite the bank. At 9 pm she sees a group of noisy teenagers outside the bank. At 9.30pm she phones the police station. ‘There are some teenage criminals outside the bank. Please come quickly’ she says. ‘I am coming now.’ says the police officer, David Miles. At 10:15pm The old lady looks out of her window. The police officer walks out of the bank. ‘Why is the police officer in the bank?’ she thinks, ‘The teenagers are outside the bank! Silly man!’ Then she looks out of the window again. Ah! The teenagers aren’t there anymore. That’s good.

Now she can go to bed. She is happy. The other two witnesses are two tourists. They walk past the bank at 9.45pm. They want to go to a party. They see the group of teenagers ‘Look! I think they are going to a party!’ So they follow the teenagers: that means they walk behind them.

The teenagers go into a disco at 10:30pm. The tourists follow them. The party is great. They don’t go home until 1am.

The police search for clues at a crime scene. They want to find something that tells them who the criminal is. They find a piece of blue material. It comes from a shirt. So that was the most important clue… Can you still remember what happened in our little story?

Important question - How does the robber enter the bank? The doors and windows aren’t broken. - The old lady sees a person leave the bank at 10:15pm.

The clues: handcuffs a piece of blue material: from a uniform? The police suspect Rob = they think he committed the crime And you? Do you suspect Rob, too? Well Rob didn’t commit the crime. He was at the disco at the time of the bank robbery. The tourists are witnesses. They followed him to the disco. So who is the criminal?

The blue material comes from a shirt. A uniform. The police in Britain wear blue uniforms. Ah ha. Now I know who the criminal is…

So, David Miles, who also works for the London Police is the bank robber. He will go to prison. Thank you very much for your help!