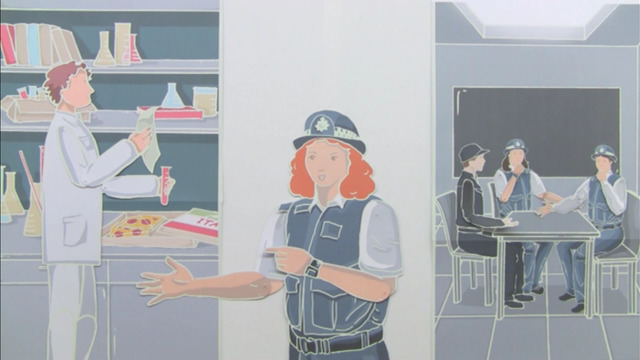 Hello again, I’m Detective Susie Quinn. My job is to help the police to catch criminals, people who commit crimes - do illegal things like stealing or killing people. When I catch a criminal he or she is punished and goes to prison. I have got information about two crimes. A bank robbery and a house robbery. I don’t know who commits the crimes. Can you help me? Let’s start at the beginning… Charlie Butler is a security guard.

Here’s what happens… A bank robber robs the bank. The next day, the bank manager calls the police. The police talk to Charlie Butler. “Mr Butler, last night there was a bank robbery. What did you see?” “Nothing. Um… I was sleeping.” “Sleeping? You are a bad security guard. You must not sleep at work!” “I’m sorry. I was very, very tired.”

Mr Butler tells the police what happened. Let’s listen to his story. “I go to work. I sit in the office and watch the TV screens. I am hungry. So I order a pizza. I eat half of the pizza. Then I am very, very tired. I don’t want to sleep, but my eyes close. I sleep until 6 am. At 6 am the bank manager comes to the office. She says there was a bank robbery.”

“Hmm… Is Mr Butler’s story true? Questions: The man wears a security guard’s uniform. Is it Mr Butler? Mr Butler says he eats half of the pizza and goes to sleep. Is there a drug on the pizza? Maybe a drug that makes you sleep? Let’s test the pizza.

The man in the laboratory says that there is a drug on the pizza. This drug makes you sleep. I don’t suspect Mr Butler now. But who is the criminal? Mr Butler orders pizza at Pizzeria Italia.

Let’s talk to the manager, Signore Malfisi. A bank robbery! This is terrible! I have a list of the people who work here. Let me see. Ah yes. On Monday Jo Santoro works here. Talk to him.” So the police search for Jo Santoro.

They put handcuffs on his hands and take him to the police station. They think he is the bank robber. He goes to prison. One week later…

A phone call. “Hello Detective Quinn. Please help us. There is a new robbery. We think the criminal is also the bank robber. But Jo Santoro is in prison. So who is the criminal?”

The victim is a man. The robber took his TV. He is the victim of a robbery. The crime scene is the man’s house. His new TV is missing.

He is at home. He orders a pizza. Then he is very tired and goes to sleep. The next day his TV is missing. I think it is the same robber! There is no witness – nobody saw what happened. Hmm... So there is no witness to this crime.

Here are my notes: Crimes: bank robbery, house robbery Victims: bank, man The first people we suspect are Charlie Butler, Jo Santoro But they are not the criminals. The clues are the security camera video, the pizza and … the tattoo... hmm... Who has got a tattoo like this? So who is the criminal? Do you know?

Let’s go back to the pizza restaurant. Then there is the manager Signore Malfisi. He has got a tattoo! Let’s talk to him. “Hello! Signore Malfisi! Can I talk to you, please?”

But he runs down the street. The police follow him. They catch him and put handcuffs on his hands.

Let’s talk to Signore Malfisi. “Signore Malfisi, are you the bank robber? “ “Yes, I am.” “Tell me about your crime.” “The security guard orders a pizza. I have got an idea…

I can put sleeping drugs on the pizza.

But then the police asks me that Jo Santoro works on Mondays. Then they suspect him, not me. ”

“So poor Jo Santoro goes to prison. But he is not a criminal. You are the bank robber and a bad man. We will punish you. You will go to prison.” That is the end of the story. Thanks for you help! Bye!