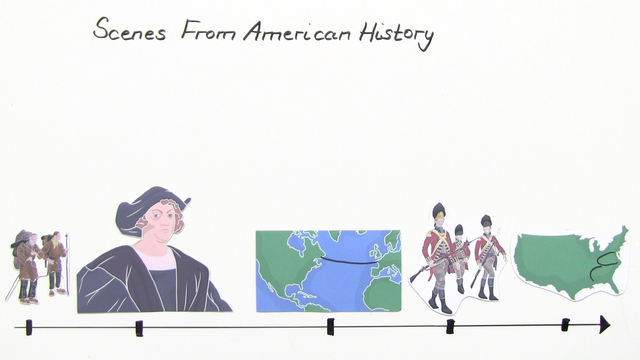 What comes to mind, when you think of the history of the United States of America? Is it the Boston Tea Party, the year 1492 and Christopher Columbus or Martin Luther King?

The first important period in American history is the time when the first settlers arrived on the American continent. One important thing to know is the fact that Christopher Columbus was not the first person who landed in North America. Other people had lived there for many centuries before he arrived. And of course there have always been native inhabitants.

Historians believe that about 40.000 BC - before Christ - the first settlers arrived on the North American continent. They came from Russia and travelled further south. Later they built homes, settled down and became farmers.

The second important milestone in American history is dedicated to the famous explorer Cristopher Columbus. Although he was not the first European who reached the North American shore - expeditions by Vikings in the 11th century explored this coastline much earlier - Columbus’ voyages led to a long-lasting European connection with the American continent.

When he sailed across the Atlantic Ocean in 1492; Europeans still thought that the world was flat and people would fall off the sides. In search for a new route to Asia, Cristopher Columbus discovered the Carribean and his later travels also explored the American continent. He called the people living there Indians, because he thought that he had reached India.

Let’s move on to the third milestone - we have to talk about the further developments in the "New World"". After Cristopher Columbus and other European explorers had discovered America, many common people followed them. In the 15th and 16th century most people came from Southern Europe or the British Isles to start a new life there.

Those European immigrants came to America for many reasons, one important reason was the chance for religious freedom. Others came to the ‘New World’ because they were looking for better jobs or because they thought they would find large quantities of gold there.

At the beginning of the 17th century Great Britain began to establish colonies in North America. Furthermore, the Atlantic slave trade was established during that time: hundreds and hundreds of slaves from Central and Western Africa were transported to the ‘New World’.

Speaking about Great Britain establishing colonies in North America - we’ve reached our fourth milestone, namely the American Revolution or the American War of Independence. The revolution broke out in 1775 and ended in 1783.

At the “Boston Tea Party” in 1773 a group of colonists destroyed the tea of three trading ships by throwing it into Boston Harbour. Great Britain responded to the protests of the American colonists by ending their self-government and putting the colonies under control of the British Army.

That in return resulted in further frustration on the side of the colonists and a militia was formed. It regularly attacked British soldiers from these weeks on.

The Thirtheen Colonies formed a unifying Continental Congress and declared their independence of the British Empire on July 4, 1776. This date markes the birth of the United States of America as a sovereign nation. The most important Founding Fathers of the USA were famous men like George Washington, Benjamin Franklin and Thomas Jefferson.

However, the war continued until 1783, when the Treaty of Paris officially ended the conflict and recognized the sovereignty of the United States of America.

Coming to the fifth and final milestone of this video, we have to mention another serious conflict in the later history of the United States. This time, however, it was a war between territories of the USA, namely the Northern states - the so called Union - and the Southern States - the so called Confederacy. This conflict is called the American Civil War and took place between the years 1861 and 1865.

Even though there has been a large variety of reasons for this armed conflict the issue of slavery was the most central one. In the years before the 1860 presidential election the political parties had already discussed whether the system of slavery was compatible with the American Constitution.

After the Republican candidate Abraham Lincoln had won the election in 1860 and became the new American president he strongly opposed slavery and wanted to abolish it for all times. While slavery was more and more phasing out in the Northern states of the USA, the number of slaves increased in the South.

The Southern states argued that they were dependent on slave labour, because they needed them on their large cotton and sugar plantations. For the Northern states it was much easier to abolish slavery because they were much more industrialized than the South.

With a vast expansion of territory in the West, the question came up whether these new federal states should be slave states or not. That issue caused further conflicts between the North and the South.

The results of the four-year conflict were more than 600.000 dead or injured people and the abolition of slavery, because the Northern forces were much more succesful. With the ratification of the Thirteenth Amendment in 1865 slavery was made illegal everywhere in the U.S. by president Lincoln.

These were five very important milestones of American History. I hope you had fun travelling through them with me. See you next time! Bye.

Presidents of the United States of America (1)

Presidents of the United States of America (2)