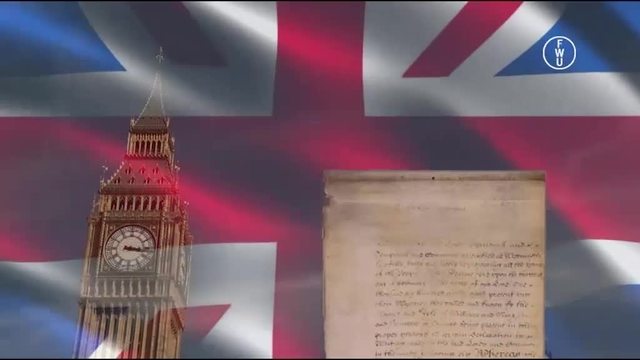 This is Buckingham Palace. It’s the residence of the British Queen or King. Because the United Kingdom is still a monarchy but it is a democracy as well. But let’s take it one step at a time. To understand this, we have to go back a few hundred years into the past. The British already had a parliament; the king could not reign by himself but had to consult with the members of Parliament on important decisions. In 1689, one of the most important documents for a democracy was passed: the Bill of Rights. Nicola Morgan: “Although the UK is a democracy, it still has a monarchy. We have a reigning Queen. It is one of the oldest democracies in the world and even before power was properly shared with Parliament, the Monarch would still share power with the most important land owners and have to consult with them. But since 1688, many hundreds of years ago, the Monarch has always had to consult with Parliament about any important decisions, suspending large amounts of taxes, that sort of thing.”Bill of Rights- The Monarch has to consult Parliament first before executing laws.- Parliament should have control over the army.- People are free to choose the members of the Parliament.Of course in the last hundred years, many things have changed in Britain. But what is the role of the Monarch in the United Kingdom today? Nicola Morgan: “And now most of the powers of the Monarch have been handed to the Prime Minister and carried out on her behalf. But the Queen still is part of Parliament, she still signs every law that is made, she still opens Parliament every year and she still makes the speech setting out what laws are going to be passed by that current Parliament, although her role doesn’t have any real political power any longer.”However, the British love their Monarch, the King or the Queen. The Queen’s or King’s official birthday is the selected day on which the birthday of the Monarch is officially celebrated. The birthday of the Monarch is a national holiday in the United Kingdom. What is the political structure of the United Kingdom? What function does Parliament have? And who is the Prime Minister? Nicola Morgan: “Behind me here is the Palace of Westminster, which is also known as the Houses of Parliament. It’s called Houses because it’s made up of the House of Commons and the House of Lords. The House of Lords is known as the Upper House and the House of Commons is known as the Lower House. But actually the most important one is the House of Commons because that’s the one that contains the elected representatives, who have been voted in by the people to represent them.”The Monarch is the Head of State, who is of course not elected but a member of the reigning dynasty. In the United Kingdom, Windsor is the name of the reigning dynasty. The other important part of the political system in the United Kingdom is naturally the people, as in any other European country. The people elect the members of the House of Commons, also called the Lower House. The House of Commons has about 650 members. The other chamber of Parliament is the House of Lords, or the Upper House. Members of the House of Lords are not elected by the people. Most of the approximately 800 members are Lords Temporal, the rest are Lords Spiritual. The House of Lords and the House of Commons constitute Parliament. The head of her Majesty’s government is the Prime Minister. He is appointed by the Queen. Of course, the Queen doesn’t choose anyone herself; she appoints the leader of the strongest party of the House of Commons to become Prime Minister. Naturally the Prime Minister doesn’t govern by himself; there are several minister with various duties and responsibilities, just as in Germany. The Prime Minister chooses about twenty people for the most important positions in the Cabinet, a small executive body within the government. So many things within the political system are similar to Germany’s, but there are some important differences. Especially this one: Nicola Morgan: “Unlike most other counties, Britain does not have a written constitution. That doesn’t mean that Britain doesn’t have a constitution, it just means that there was no one time or event when a group of people in power got together and designed the way that the system would work. It has simply evolved over hundreds and hundreds of years. So it’s an unwritten constitution.”The next time you visit the United Kingdom and watch the Changing of the Guard at Buckingham Palace, take note! This is not merely a tourist attraction! This is the Guard of the Head of the United Kingdom: the Monarch.