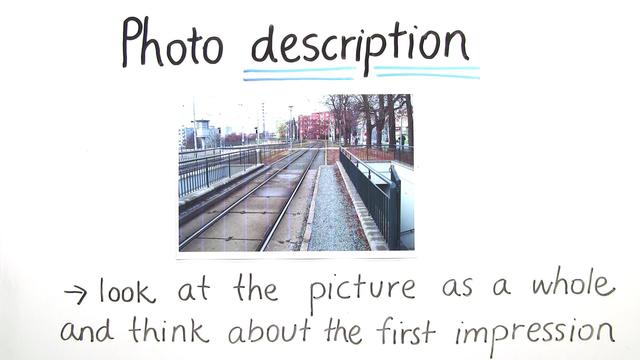 Hello let me welcome you to today's clip. If you want to know how you can describe and analyze a photograph, then you´ve chosen the right video. I´ll teach you all you need to know, so that at the end of this clip, you´ll be able to talk about photographing with confidence. You´ll learn some useful vocabulary and you will know, what to focus on, when describing a photo. I'm only going to use English today, so you may want to have a dictionary near you, in case you need to look up some new words. I'll give you a tip: If you don't understand something I´m saying, simply click on the pause button and look the word up before you continue watching. Photographs are everywhere in today's society. In advertisements, magazines, newspapers and on the internet. Many people argue, that a photograph isn't just a moment captured in time, but that it also has an intended meaning and that in some way, it hopes to have an effect on its audience. That´s why it´s good to not only look at the photograph superficially, but to think of deeper meanings it has. There are many ways and tricks to achieve a desired effect, which we´ll discuss later. I´m sure you´ve heard the saying that a picture says a thousand words. When we are talking about photographs there are always 3 steps we have to follow. First, we describe the photo. Then, we analyze it. And finally, we interpret the picture. Description, Analysis, Interpretation. Lets discuss these 3 steps in greater detail. We´ll start with the photo description. Look at this photo. You should first look at it as a whole, and think about the first impression it makes. Then you should describe its important details. Its also good to describe the source, if its mentioned, and describe the context of the photograph. Before I show you an example of how you can write this, let me show you a few phrases for describing details. In the middle of the photo. In the foreground. In the background. On the right. In the right part. On the left. In the left part. In the upper left-hand corner. . In the upper right-hand corner. . In the bottom right-hand corner. . In the bottom left-hand corner. Notice the phrase upper left-hand corner, or . bottom right-hand corner, with these, you have to use the word hand. When describing a photograph, you should use the present tense. Ok, lets look at one possible description of our photograph. This photograph shows one autumn afternoon in a town or a city. The picture is dominated by two main elements: there are rail tracks, going from the foreground across the whole picture, and in the background we see a few blocks of flats and a chimney, so this is probably an industrial area of the town. In the bottom right-hand corner, as well as on the left, there are entrances to the underground. The atmosphere of the photograph is quite melancholic, but one also feels a sense of peace and calmness. This was just one example how to describe this photo. Of course its not the only possible answer. Like we´ve said, step 2 is to analyze the photo. Think about the frame, composition, point of view and perspective. Here is one possible analysis of our picture. The point of view chosen by the photographer is off somebody standing directly on that path, by the rails. This gives the photo a touch of reality, as we can imagine ourselves being the photographer.  We can see quite far into the background but we cannot see what it further on the right and on the left, which gives us a sense of limitation. This picture conveys a cold atmosphere but not entirely depressive. This has to do with the colours - although this is a colour photograph, the colours are not very bright. On the one hand it conveys the idea that nothing moves, and everything has come to a standstill. On the other hand, the rail tracks may symbolise a way out of the place, a journey. So, you have already gone through 2 steps: a photo description and a photo analysis. Now let´s discuss the last part, the interpretation. This is quite similar to the analysis part, but here you should think about its deeper meanings. What effects does it have? Does it have any political meaning or is there a particular message it wants to convey? We finished out analysis with saying, that although there is a sense of limitation, the rail tracks gives us an opportunity to escape.  Let´s see how we can interpret all this and finish our photo discussion. This can be seen as a metaphor for a seemingly hopeless situation, but one in which there is a way out. One could interpret the picture´s message as relating to the life in the city - one is trapped inside, but has the possibility of escape. The chimney and blocks of flats could also lead to the discussion on cities damaging natural environment and the effects it has. It is hard to say whether the photographer intended such a "message" when he took the picture or whether it just happened by coincidence. This was one example of looking at photos. Why don´t you look at photographs you´ve taken and try to do the same thing! Always mention these 3 aspects: description, analysis, interpretation. In the description part, you use phrases such as in the foreground, . In the bottom left-hand corner, in the background, in the middle and so on. And in the analysis part think about the frame, composition, point of view and the perspective. Finally, try to comment on the deeper meanings and any kind of political, environmental or other message. That´s all for today, thanks for listening and join me next time, Bye Bye!