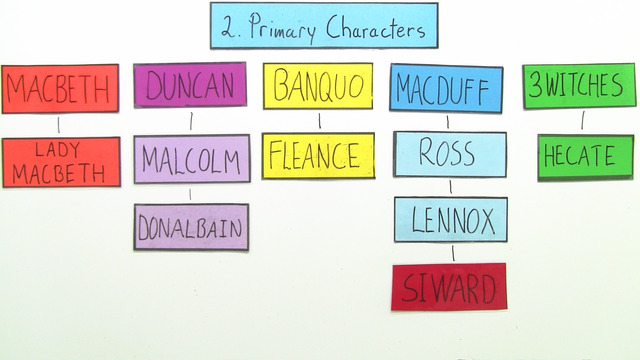 Hello. My name is John and I come from the US, near Chicago. The title of this series is Shortened Shakespeare and today's play is Macbeth. This is part one of two parts. Just to be warned, this presentation is in English so you may want to have a dictionary handy. Part one will be divided in to (1) general information about the play and (2) primary characters. General information. Macbeth was written in 1605 in Elizabethan England. The story is set in various locations in Scotland, including a Heath, Heide, a witches den, Hexenhöhle and in about two castles, an estate and an army camp. Themes in Macbeth. Macbeth is a complex play, mixing ambition, fate and guilt with supernatural powers. Macbeth is classified as a tragedy. As a tragedy, we will see the central character, Macbeth, brought to a ruinous end through flaws in his character, in particular by his ambition. He is aided in bringing about his own downfall by his equally, if not more, ambitious wife, Lady Macbeth. Macbeth is traditionally referred to by actors as the Scottish Play. Primary characters. Here are the primary characters in Macbeth in their various groupings. Macbeth and Lady Macbeth. King Duncan and his sons Malcolm and and Donalbain. The noblemen Banquo and his son Fleance. The allies against Macbeth, Macduff, Ross, Lennox and the English general Siward and three witches and their leader, Hecate. Now let's look at our primary characters individually. Macbeth, Thane of Glamis, Thane of Cawdor and later King of Scotland. A thane is a Lehnsmann, adlig. At the beginning of the play, Macbeth is a loyal commander in King Duncan's forces and helped Duncan defeat a rebellion. For his bravery, Duncan gives him the title and lands of one of the rebel supporters. Later Macbeth murders Duncan and claims the throne as King of Scotland. In the end, he's abandoned by everyone, seen as a usurper and killed. What leads to Macbeth rise and fall? After listening to 3 witches, he believes the parts of their prophecies about his rise while trying to overcome the part indicating his fall. Macbeth is ambitious but initially hesitant to take the crown by killing Duncan. But his strongest ally, his wife, convinces Macbeth to take the necessary step when Duncan visits Macbeth's castle. Once the step is taken there is no turning back. Macbeth becomes a paranoid and murderous leader whom others need to stop. Lady Macbeth. Lady Macbeth is very ambitious and sees the opportunity for her husband to become King and for her to become Queen. She is more willing than her husband to see Duncan killed. She supports Macbeth when he is weak but in the end is overcome by her own guilt and commits suicide. Duncan, King of Scotland. Duncan is the respected king of Scotland, who has just put down a rebellion with the help of Macbeth. He rewards Macbeth with the lands and title of Thane of Cawdor but Macbeth later murders Duncan. Malcolm and Donalbain, Duncan's sons. Malcolm is the elder of the two and next in line to throne. Both flee the side of Duncan’s murder and seek help from the English to overthrow Macbeth. Banquo. Banquo is a general in Duncan's army and starts out as Macbeth's best ally. They are both mentioned in the predictions of the witches, where it is said Banquo sons are to be kings. Macbeth has Banquo killed. Later, Banquo appears to Macbeth as a ghost. Macduff. Macduff is a respected scottish noblemen. He is married to Lady Macduff and has several children. When Macbeth learns that Macduff has abandoned him, he orders the murder of Macduff and his family. The family is killed but not Macduff. Macduff was born by a cesarean section, Kaiserschnitt. This is important, because it was predicted that Macbeth could only be harmed by a man not born of a woman. Macduff does, in fact, eventually kill Macbeth. Ross and Lennox. Ross and Lennox are thanes loyal to Duncan's son, Malcolm. Siward ist General of the English Army and allied with Malcolm. Three witches. The three witches are also known as the weird sisters. The witches predict events which Macbeth and is wife try to interpret. They say that Macbeth will become Thane of Cawdor, which he does. They also predict that he will become King, which he does by murdering Duncan. But when Banquo asked the witches about his future, they tell him that his heirs will be kings of Scotland. In other words Macbeth's family line will end with him. Their other important predictions are that Macbeth can only be harmed by a man not born of woman and that he is safe until Birnam Wood comes to his castle at Dunsinane. Our last character is Hecate, an ancient deity who rules the witches. Let's review our primary characters in Macbeth. Macbeth and Lady Macbeth. King Duncan and his sons Malcolm and Donalbain. The noblemen Banquo and his son Fleance. The allies against Macbeth, Macduff, Ross, Lennox and the English general Siward and three witches and their leader Hecate. Okay, that's it for part one of Macbeth. In part two we will double, double our toil and trouble and review the plot, structure and events of the play. See you in part two of Macbeth. This is John saying bye bye for Shortened Shakespeare.

“Of Mice and Men” – interpretation and public perception (Steinbeck)